Apps in Class - The Challenge

Apps in Class - the Challenge is a project organized by CIP, the Pedagogical Innovation Center at Universidade Positivo, a higher education institution in Curitiba, south of Brazil. With this idea, CIP is trying to stimulate the professors from the University to be more creative and to develop new methodological and technological approaches for their classroom tasks. Therefore, the focus from their practice would be the improvement of learning gains by students, with activities that are not only academic relevant, but also satisfying for students.
In this context, CIP decided to create a project involving multiple disciplines, putting together four professors from the schools of Social Sciences, Health and Business. The students from the following undergraduate programs, Architecture and Urban Planning, Law, Business and Dentistry, have been challenged by the professors to develop mobile apps, based on the contents they learned in the academic year, with the objective of becoming the main protagonist in their own learning process. Two hundred and ninety students have participated in Apps in Class - The Challenge.
The intention was to change the routine inside the classroom and to encourage student's meaningful learning with the support of mobile technologies.
After the development of the apps, the best projects selected by the students participated in an Award Ceremony, with the presence of Universidade Positivo's Rector and Directors. The students were recognized by their innovative work and the university community became aware of the possibilities we have to use new technologies in higher education. 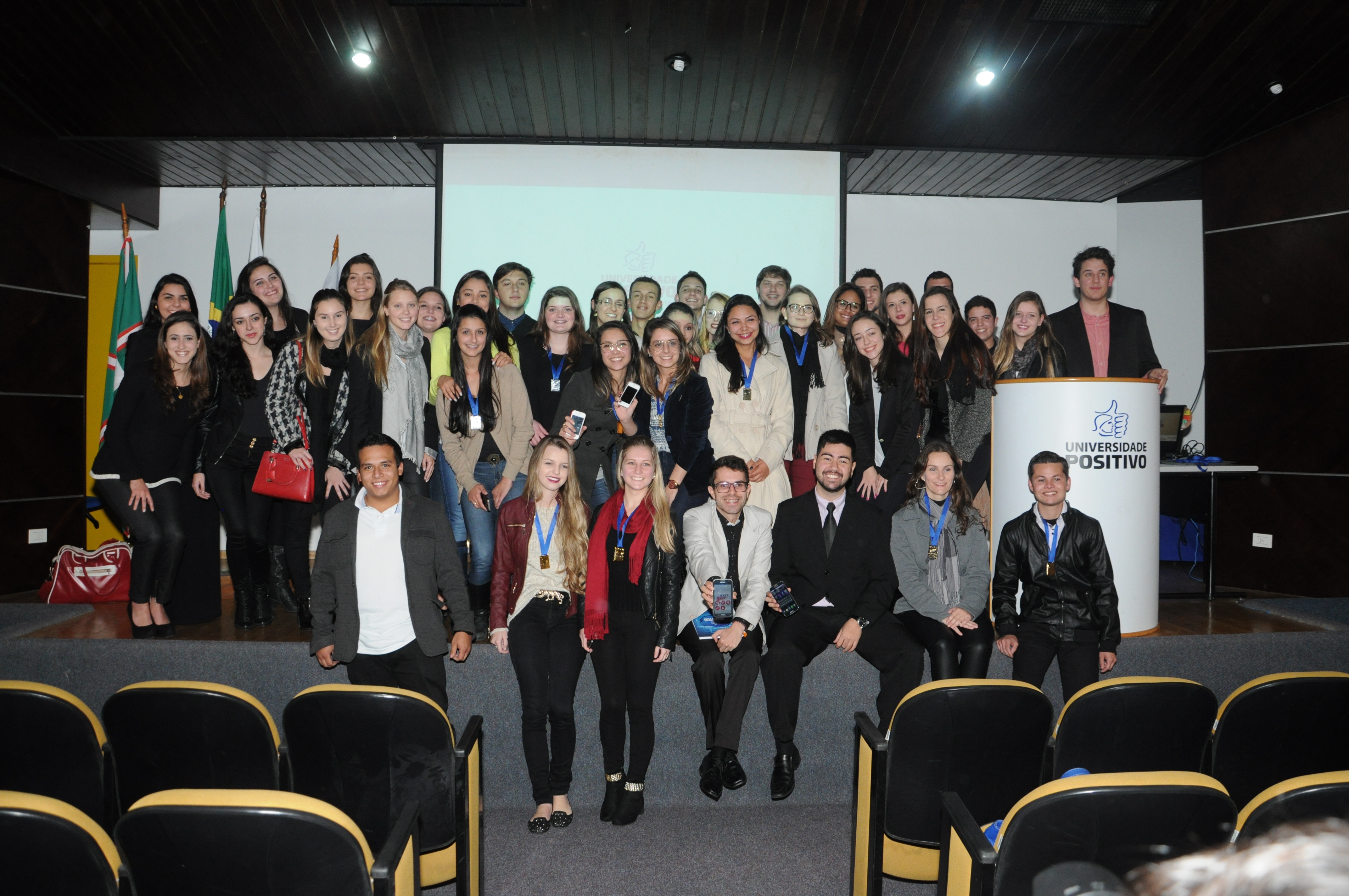 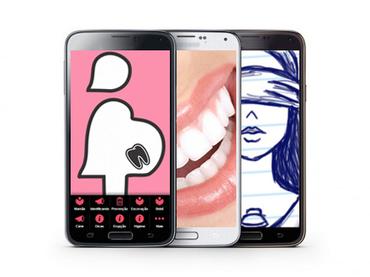 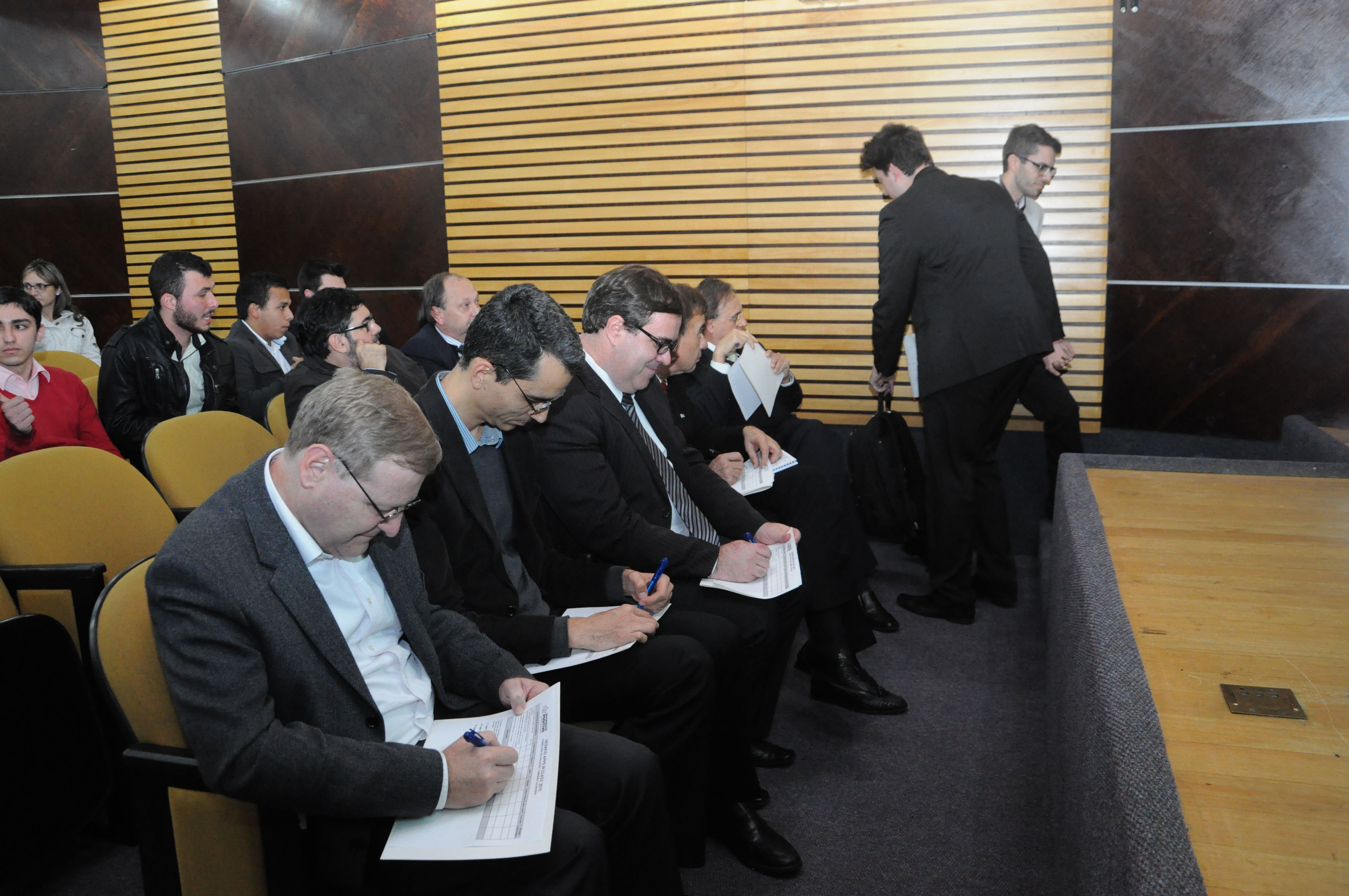 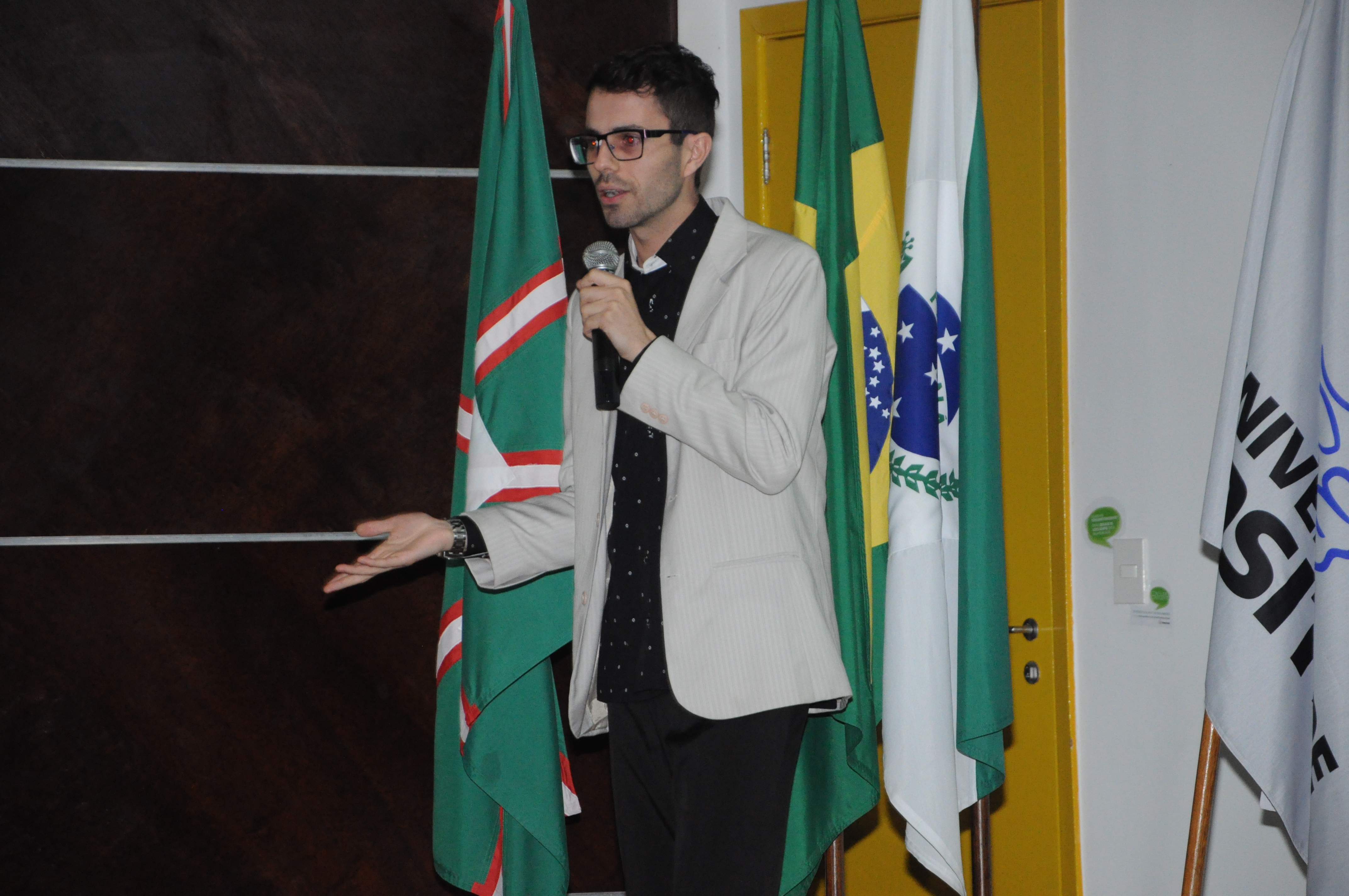 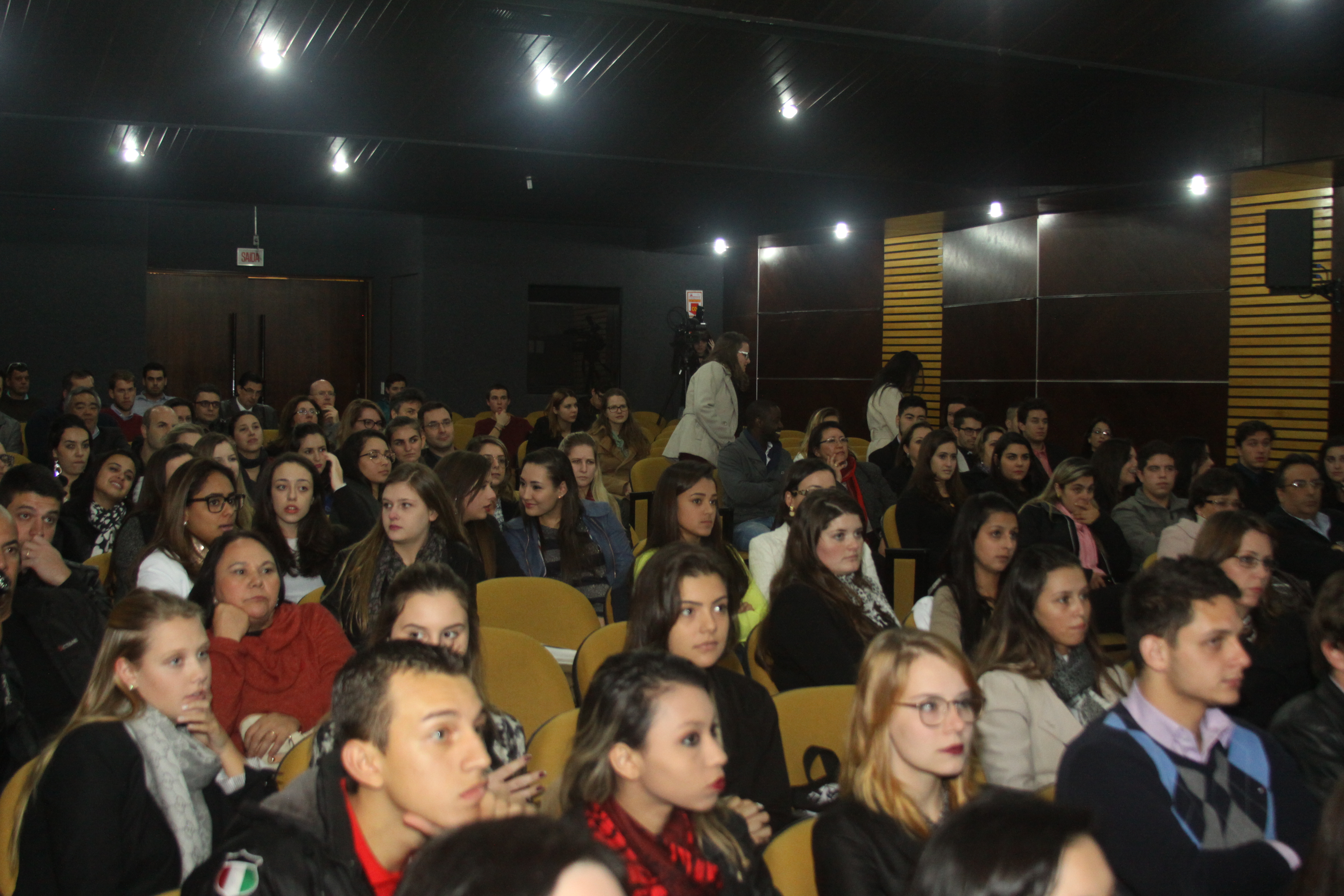 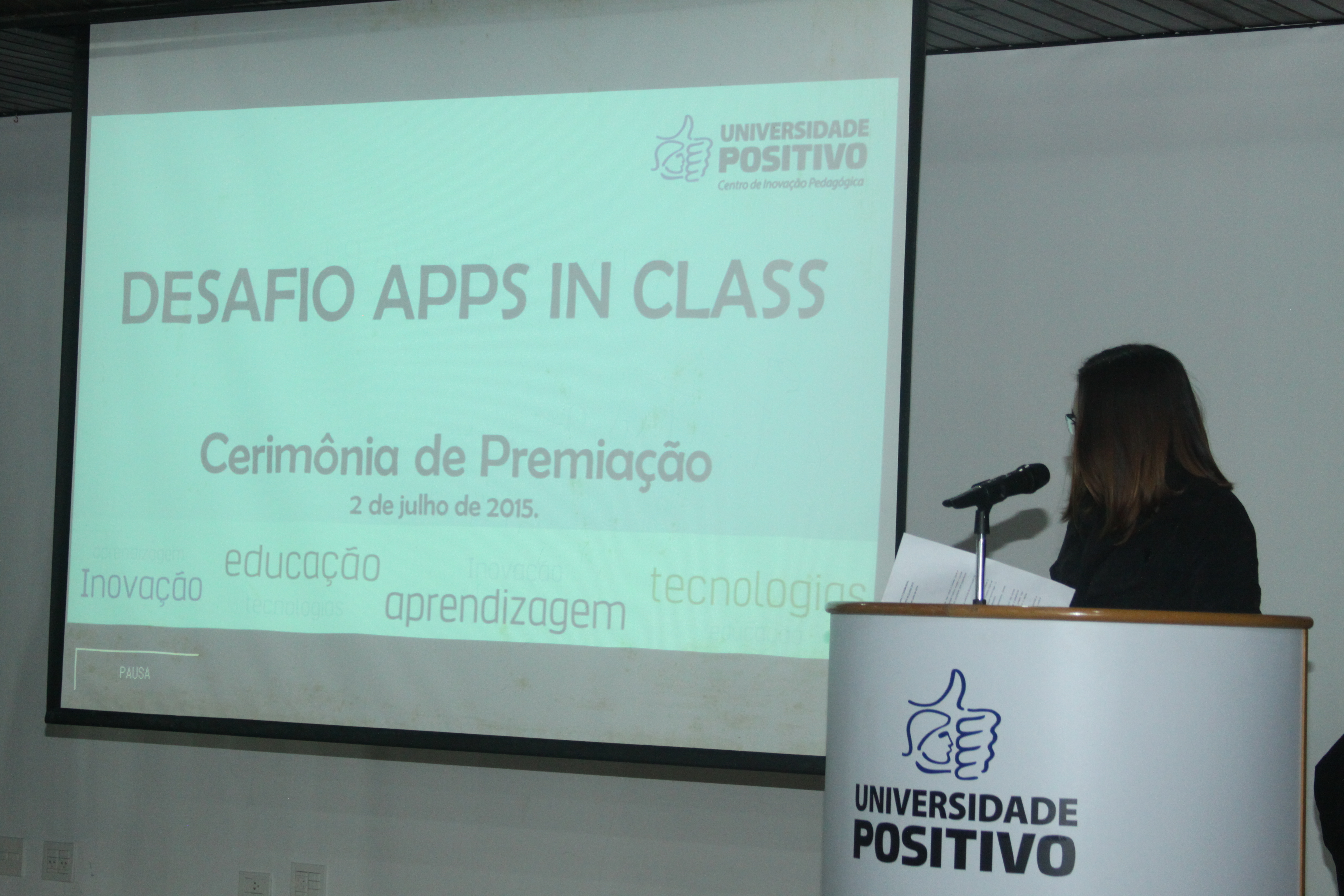 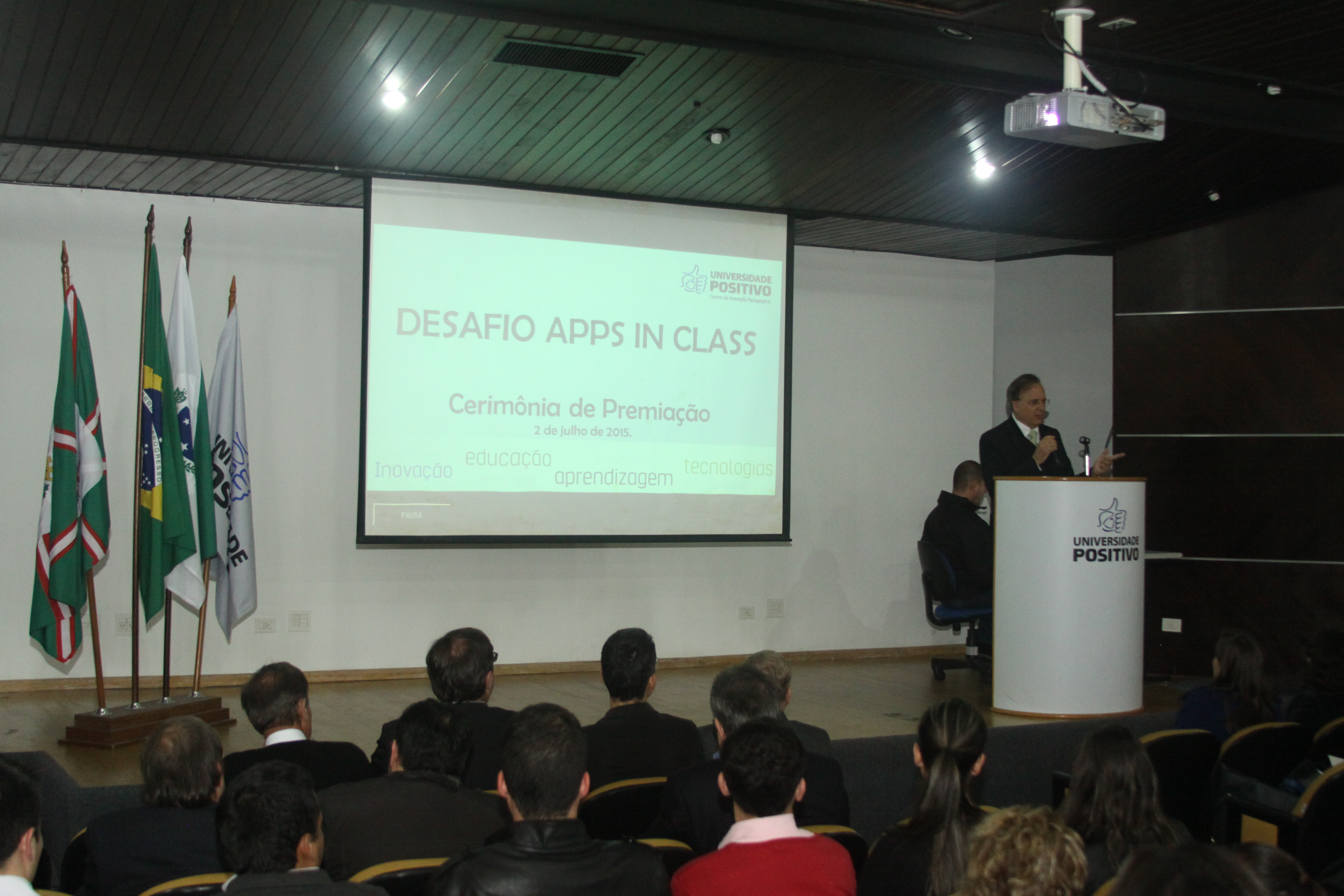 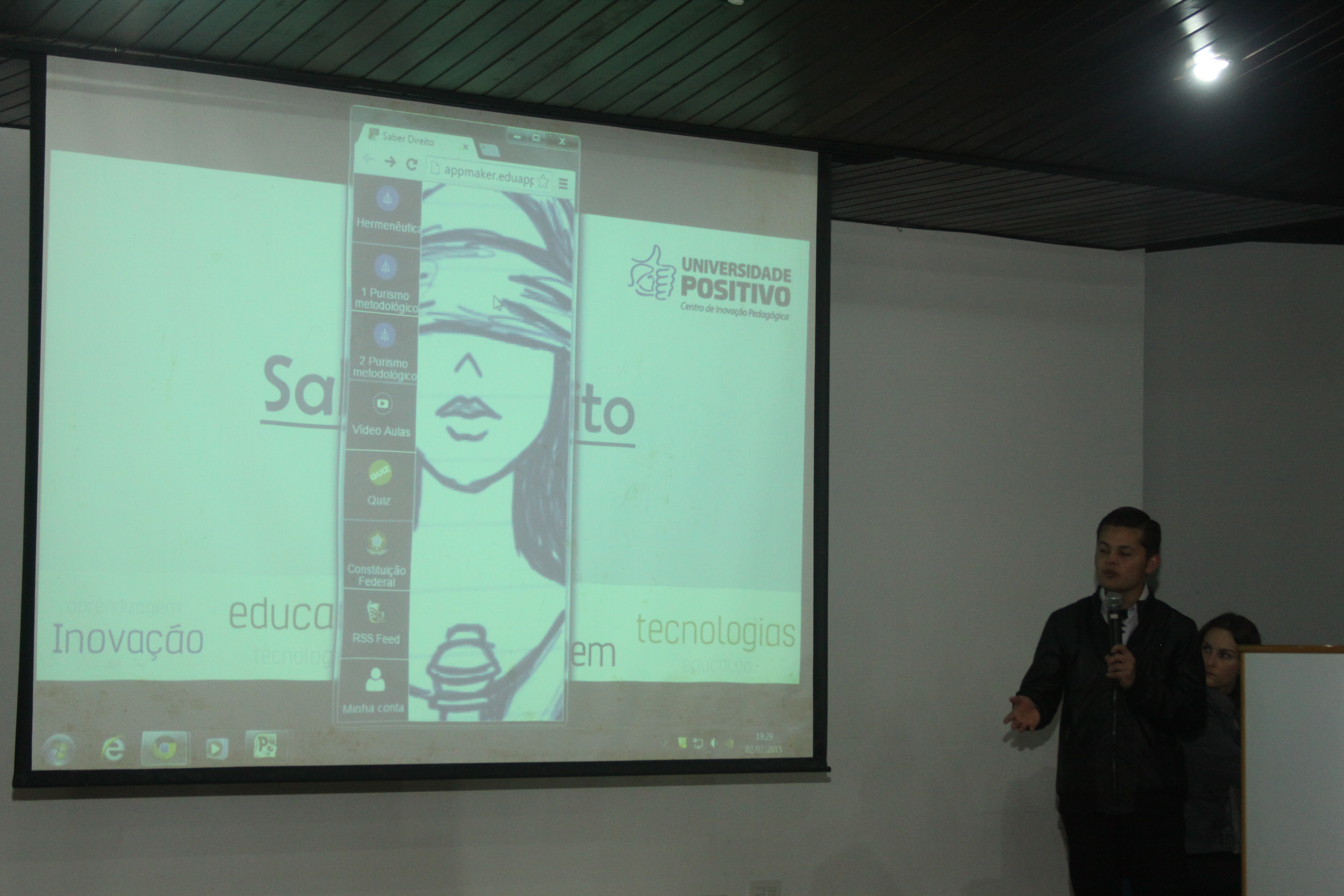 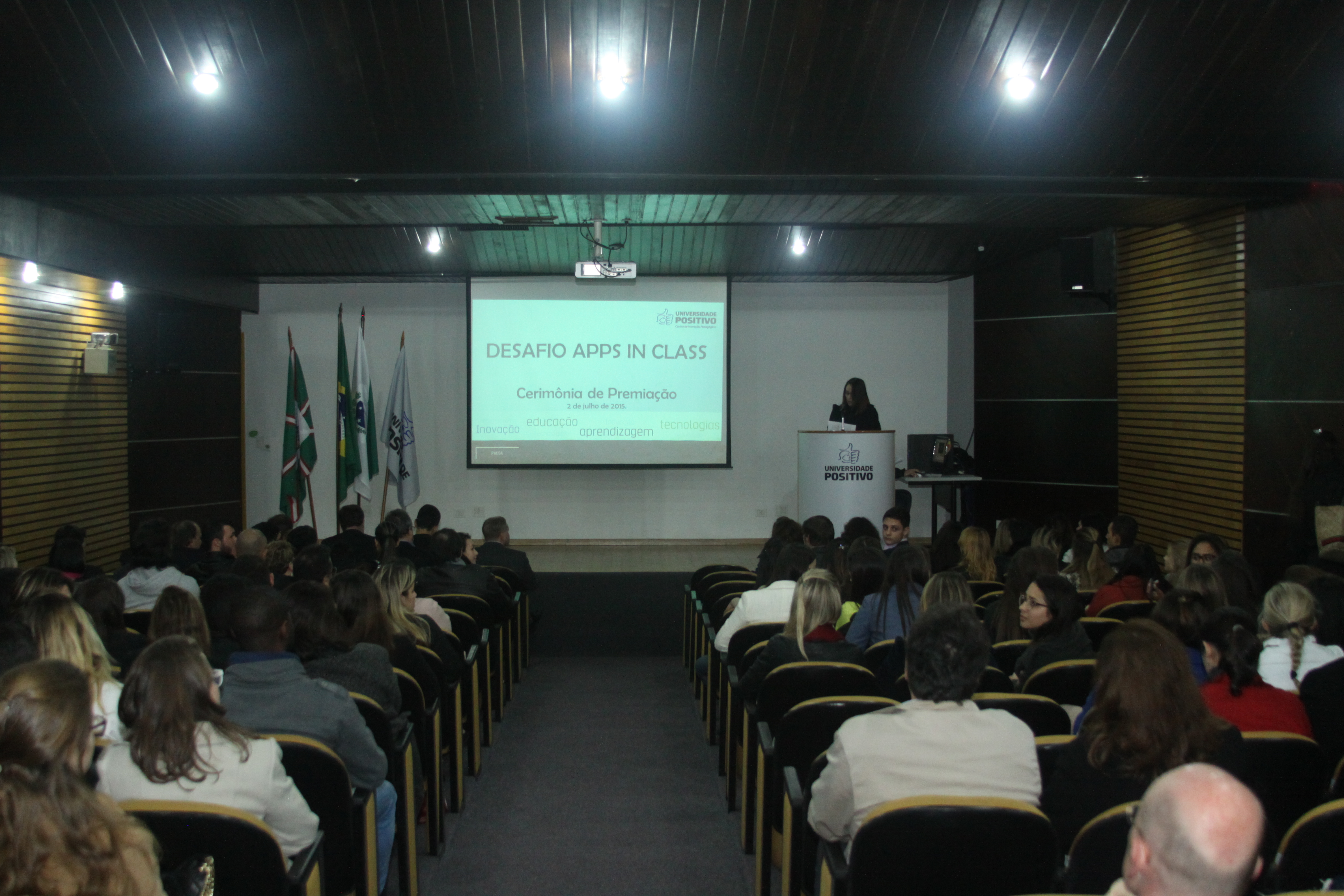 Apps in Class - the Challenge is a realization by CIP, the Pedagogical Innovation Center at Universidade Positivo, a higher education institution in Curitiba, Brazil. The intent of this project is promoting mobile learning among students and professors by using cell phones in education.
The fast technological development that has occurred in the past few years in mobile phones technology (internet Wi-Fi and 4G), and also the recognized potentialities from this innovation, such as portability, mobility, interactivity, connectivity and ubiquity, signalize favorable conditions for educators to search for new teaching approaches and methodologies that can include mobile devices in education.
In Brazil, although interactive digital technologies have been present in some classrooms, a great amount of teachers still struggle with thinking and executing pedagogical actions focused on student learning achievements.
Lectures focused only on information transmission are still part of many Brazilian classrooms. Interactive digital technologies, in this scenario, end up reproducing the same pedagogical conception based on content and centered on the teacher.
Barriers on the teacher's education; personal and technical difficulties; structural and curricular deficiencies are other issues that have been creating difficulties in the effective usage of digital interactive technologies in the classrooms.
In this context, the objective of Apps in Class - the Challenge is to stimulate university professors to search for new methodological and technological approaches that are able to change the focus of their practice from teaching to learning. For this pilot project, four professors at Universidade Positivo, from following undergraduate programs: Architecture and Urban Planning, Law, Business and Dentistry, have challenged their students to develop mobile apps, based on the contents they learned in the academic year, with the objective of becoming the main protagonists in their own learning process. Two hundred and ninety students have participated in Apps in Class - the Challenge.

Higher education in Brazil is going through a significant expansion process. However, when students enter the university, they often have difficulties to follow the curriculum proposed at this level of education. Those difficulties are mostly related to the gaps in the learning process in elementary, middle and high schools. We can add to that scenario the fact that most Brazilian undergraduate students work full time and therefore, have little time to dedicate to their studies. In addition, the methodologies and technologies used by professors are not appealing to the student audience.
With the intention of changing the routine inside the classroom and encouraging student's meaningful learning with the support of mobile technologies, Universidade Positivo created Apps in Class - The Challenge. This project was based on the assumption that mobile devices, such as cell phones, can be great allies to the improvement of the teaching-learning process, since those gadgets are part of the student's daily life, who are members of the digital generation. Digital natives are multitaskers. For them, a cell phone is not only a tool with the exclusive function of making and receiving phone calls. It is also used for listening to songs, texting, taking pictures, accessing the internet and even watching TV.
For the purpose of potentializing the use of cell phones in higher education, the professors invited to participate in Apps in Class - The Challenge were trained to use the platform EDUAPPS, designed to create apps for mobile phones, so they could know and explore the resources available on the platform. After the training, the students, in teams of six, were challenged by the professors to develop an educational app based on the contents they learned in the academic year.

Apps in Class - The Challenge was organized in four steps, as described below:
First step: (promotion, conception and development): students from each participating class were grouped into teams. They were challenged to create apps for cellphones based on the contents they learned in the academic year, considering the following criteria: consistency with the target audience; quality of the idea (including creativity and originality); implantation of the app's idea (including user experience and design); didactic relevance.
Second step: (classification): the teams presented their apps in their own classrooms, with the presence of their professor. Each student voted for the app he/she preferred. The four apps from each undergraduate program that received the largest number of votes were qualified to the next step. The apps that were not related to the academic contents learned in the academic year were not classified.
Third step (qualifiers): A technical committee evaluated sixteen apps - four apps from each undergraduate program - that received the largest number of votes by the students in the previous stage. This committee selected the two best apps from each undergraduate program, coming to eight apps.
Fourth step (Finals): In the Award ceremony, that happened on July 2, 2015, the eight best apps were presented by the teams to the Judging Committee and to the other guests who attended the event.
The jury evaluated the final eight applications according to defined criteria mentioned previously. The top three teams were awarded medals corresponding to their placements, certificates and a dinner.
The award ceremony brought together not only the students and professors involved in the project, but also the Rector and Directors of Universidade Positivo, the program coordinators and professors of different areas. The families of the participants and members of the comunity were also part of the ceremony.

During the last week of July 2015, Universidade Positivo will promote its Pedagogical Planning, and one workshop will be offered to the professors, focused on mobile learning. They will be trained on how to work with their students to create apps. We believe that, with the results obtained with the first edition of Apps in Class - The Challenge and with the promotion of the apps that have already developed, we will have a significant adhesion of new professors and, consequently, we will expand our project.
Thus, CIP, the Pedagogical Innovation Center at Universidade Positivo, is organizing new editions of Apps in Class - The Challenge, in order to continue encouraging the participation and accumulating good results.
For the second part of the 2015 academic year, Universidade Positivo's School of Exact Sciences has requested the establishment of a Challenge involving professors and students of the first and second years of the eight Engineering undergraduate programs in the University. The intent is to start a debate on how to change the professor' classroom practices.
We believe that creating challenges are necessary initiatives until such time that the academic community has already been able to absorb the idea that there are numerous ways to teach, to learn and, in particular, to produce knowledge with interactive digital technologies, regardless of the discipline taught.
It is important to show that you can bring use of technologies that are already part of students' daily lives to the classroom, transforming learning into something closer to the reality of students and teachers.